Index Lectionum: A Comparative Table of Readings for the OF and EF - Now Available!

Index Lectionum: A Comparative Table of Readings
for the Ordinary and Extraordinary Forms of the Roman Rite
(Lectionary Study Aids, vol. 1) 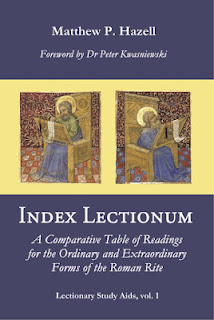 The reason things have been a little quiet on the blog so far this year is because I have been busy finishing off work on the above book, the Index Lectionum. I am happy to announce that the book is in print and now available to purchase from Amazon!

What is the Index Lectionum? It is a new tool that aims to make the comparison of the lectionaries of the Ordinary and Extraordinary Forms easier than it has been up until now. All the readings at Mass in both forms of the Roman Rite have been arranged side-by-side in biblical order, with their use in each form documented. This book thus makes it possible to look up a biblical reference and quickly find out if it is used on the same day or celebration in the OF and EF, or where a reading in the EF has been transferred to in the OF, and so on.

Dr Peter Kwasniewski, professor of theology at Wyoming Catholic College and one of my colleagues over at New Liturgical Movement, has very generously contributed the foreword to the Index. He writes that:


[T]his Index also facilitates, in fact for the first time, fruitful scholarly comparisons between the old and new lectionaries... We have waited close to half a century for the opportunity to hold in our hands a single resource that indicates, with painstaking detail, just what the reformers added and, perhaps of far greater interest, what they chose to omit that had once been present in the Church’s worship. Thus equipped, we are at last in an optimal position to carry further the kind of comparative studies on the lectionary that Dr. Lauren Pristas has perfected in regard to the collects of the Mass. (p. vii)

The Index Lectionum is the first volume in the "Lectionary Study Aids" series of books: subsequent volumes will take up the use of the Psalms in the two Missals, as well as comparing the psalms and readings of the two forms of the Roman Office.


For all those who love the Church's liturgy, the Index Lectionum is a vital comparative tool for further study of and research into the lectionaries of the Ordinary and Extraordinary Forms: their relationship to one another, their similarities and differences, and their respective pastoral advantages and disadvantages.

Contents of the Index Lectionum

All comments go into the moderation queue, to help eliminate spam.

Index Lectionum: A Comparative Table of Readings for the OF and EF

The Post-Communion Prayers in the Ordinary Form of the Roman Rite: Texts and Sources

The Proper of Time in the Post-Vatican II Liturgical Reforms

The Acta synodalia of the Second Vatican Council

Draft Schemata to be Discussed at the Conciliar Sessions (Vatican II)