I mentioned in my last post that I was on the lookout for a copy of the French experimental lectionary. Well, I managed to track down volumes 2 and 3 for a good price on AbeBooks! 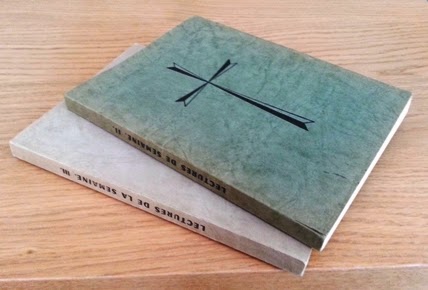 I was hoping that it would have been all three volumes, but unfortunately the seller appears to have confused volume 1 with the Canadian experimental lectionary. Oh well - the Lectionnaire pour les jours de semaine (Ottawa: Service des Editions liturgiques de la Conférence Catholique Canadienne, 1967) is an interesting piece of history to have on my shelf! Canada, like England & Wales, used the German scheme of readings, and according to the Lectionnaire, permission for them to use that experimental scheme was given by the Consilium on 21st January, 1966. Compared with the English & Welsh lectionary, the Canadian lectionary has slightly different instructions for its use, which I will copy and upload soon.

Anyway, I now have volumes 2 and 3 of the French Lectures pour les Messes de semaine (ad experimentum) (Centre National de Pastorale Liturgique, 1966). Volume 2 contains the readings for weeks 1-20 after Pentecost; Volume 3 contains the readings for the rest of the time after Pentecost, as well as Advent, Christmastide, Epiphany, time after Epiphany, and Septuagesima through Quinquagesima.

Volume 1, as far as I can ascertain, contains the readings for Eastertide. Now, to make a table of the scheme in its entirety, I would ordinarily need this seemingly very hard to track down volume (at the time of writing, there weren't any secondhand copies listed on any of the sites I usually check). However, at the back of Volume 3 is an index of the readings for all three volumes. This means that, with a little extra work, the forthcoming table of the French experimental scheme will be complete! Hooray!

So, that's what's coming up. Most of the tools will then be available to help with basic comparative studies of the experimental lectionaries with each other, and also with the reformed lectionary. Watch this space!
Posted by Matthew Hazell at 15:57

All comments go into the moderation queue, to help eliminate spam.

Index Lectionum: A Comparative Table of Readings for the OF and EF

The Post-Communion Prayers in the Ordinary Form of the Roman Rite: Texts and Sources

The Proper of Time in the Post-Vatican II Liturgical Reforms

The Acta synodalia of the Second Vatican Council

Draft Schemata to be Discussed at the Conciliar Sessions (Vatican II)